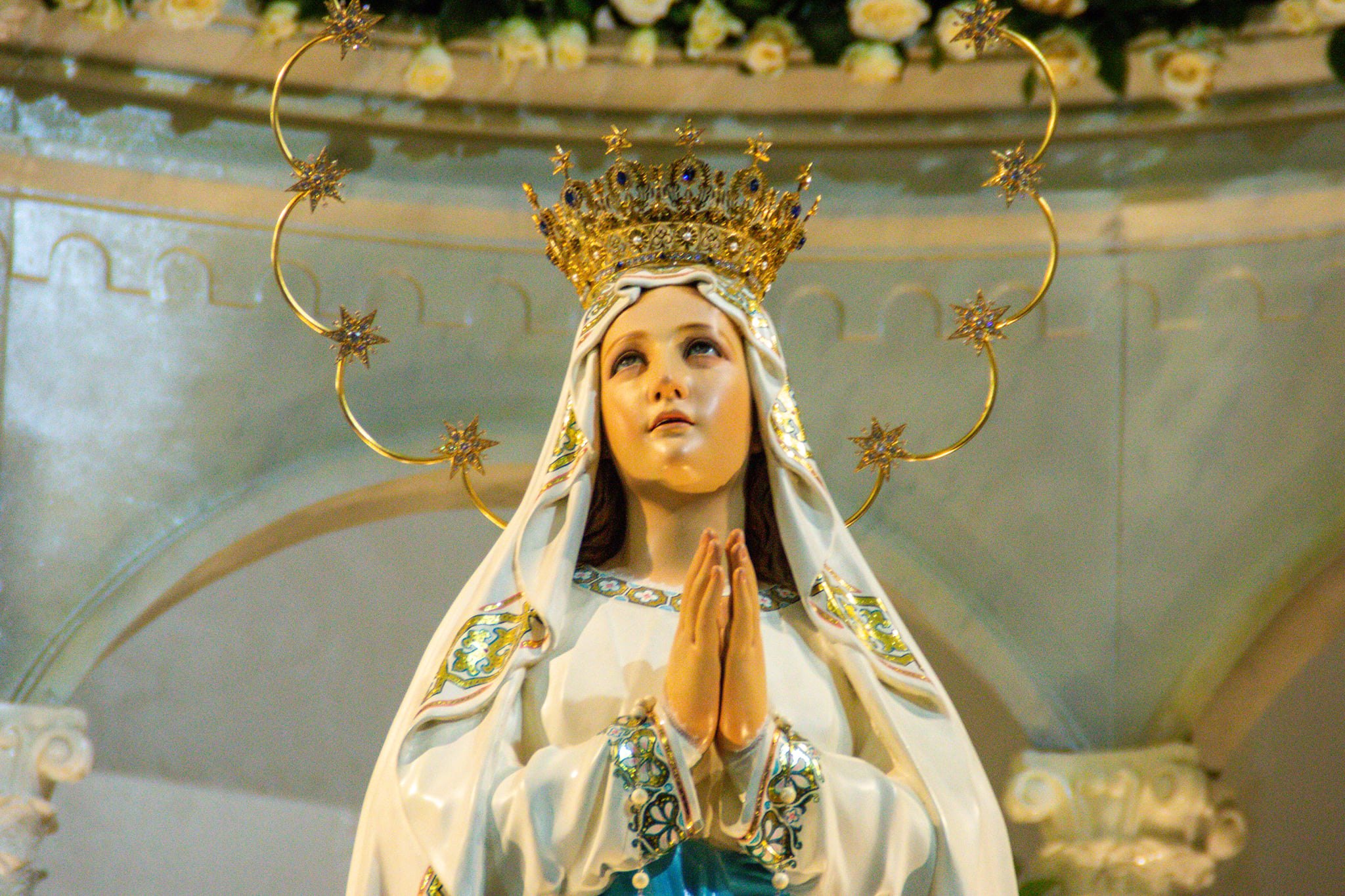 At last, the long awaited day of the canonical coronation came; government restrictions made the celebration to be held in a closed door manner but despite of this, it was still a meaningful celebration.  The Holy Mass was presided by his Excellency, Most Reverend Honesto F. Ongtioco, DD, the Bishop of Cubao.  The celebration was also graced with the presence of Most Reverend Victor B. Bendico, DD, Bishop of Baguio and Most Reverend Mylo Hubert C. Vergara, DD, Bishop of Pasig and Most Reverend Joseph A. Nacua, OFMCap, DD, Bishop Emeritus of Ilagan, Isabela.  Together with them were Capuchin brother priests from different fraternities and guests priests from the Diocese of Cubao.  Ministering in the mass were the Capuchin Theology scholastics who served as choir; the Philosophy scholastics who served as acolytes; lay lectors, greeters and usherettes and members of the commission.    Capuchin deacons also served in the mass – Brs. Rolando B. Datu, OFMCap. and Jose Eduardo A. Mayo, OFMCap.  Br. Rubencito G. Bartolo, OFMCap. read the first reading in Spanish while Br. Jose Eduardo chanted the Gospel in Latin.

In his homily, Bishop Ongtioco cited the significance of the coincidental transfer of the date of the coronation from May to August.  He stated that it is truly timely that our Mother chose to be crowned in the midst of the raging pandemic, to remind everyone of her title as health of the sick.  This is very much connected to the devotion accorded to her as Our Lady of Lourdes, wherein many of the sick come and ask for her intercession for physical and spiritual healing.

After the homily came the rite of coronation.  It was preceded with the reading of the decree of the papal approval of the Canonical Coronation, in Latin by Br. Artemio T. Raymundo, OFMCap. and in English by Br. Ron E. Ojeda, OFMCap.  Afterwards the canonical crown, rosary and arreola were brought forward and blessed by Bishop Ongtioco.  Bishop Bendico placed the rosary over the hands of the Lady and then followed by the arreola which was set by Bishop Vergara.  Lastly, Bishop Ongtioco solemnly placed the canonical crown over the head of the Lady, a truly touching moment which resonated in the hearts of those who witnessed the event.

Just before the end of the mass, Br. Eugenio P. Lopez, OFMCap. expressed his gratitude to those who took part and worked hard for the success of the celebration.  Afterwards, two decrees from the apostolic penitentiary concerning the indulgence from the coronation were read.  First is the confirmation, transfer and extension of the indulgence from the day of the coronation to the solemnity of the Immaculate Conception on December 8, 2020. The second is the imparting of the Papal Blessing and plenary Indulgence for those who took part in the celebration, even those who took part through media broadcast.  After the reading of the decrees Br. Eugenio incensed the newly crowned image while the hymn “Sa Iyo Birhen ng Lourdes” was being sung.

It was truly a historical and momentous event and, even though the faithful were not able to be physically present, they were able to join through live streaming. This was made possible through the media ministries of the shrine and the Diocese Cubao.  Many longed to witness the celebration even through the internet and thus, it was reported that that the celebration had 40,000 plus views over NSOLL’s facebook page.

Later, at four o’clock in the afternoon, the newly crowned image of Our Lady was brought out from the shrine for a solemn procession around the parish.  The procession was led by Capuchin brother priests and the carroza of the image was pushed by Capuchin scholastic and religious brothers.  Many parishioners and devotees waited along the road to see the passing of our Lady, some shed tears of joy as they viewed the great honor bestowed upon the Blessed Mother.  The procession became a beacon of hope for many who continue to hold on in faith amidst the great trials they are facing.

An Experience of a Lifetime: The Inter – Franciscan Greccio 2021 x Capuchin Brothers at the Peripheries