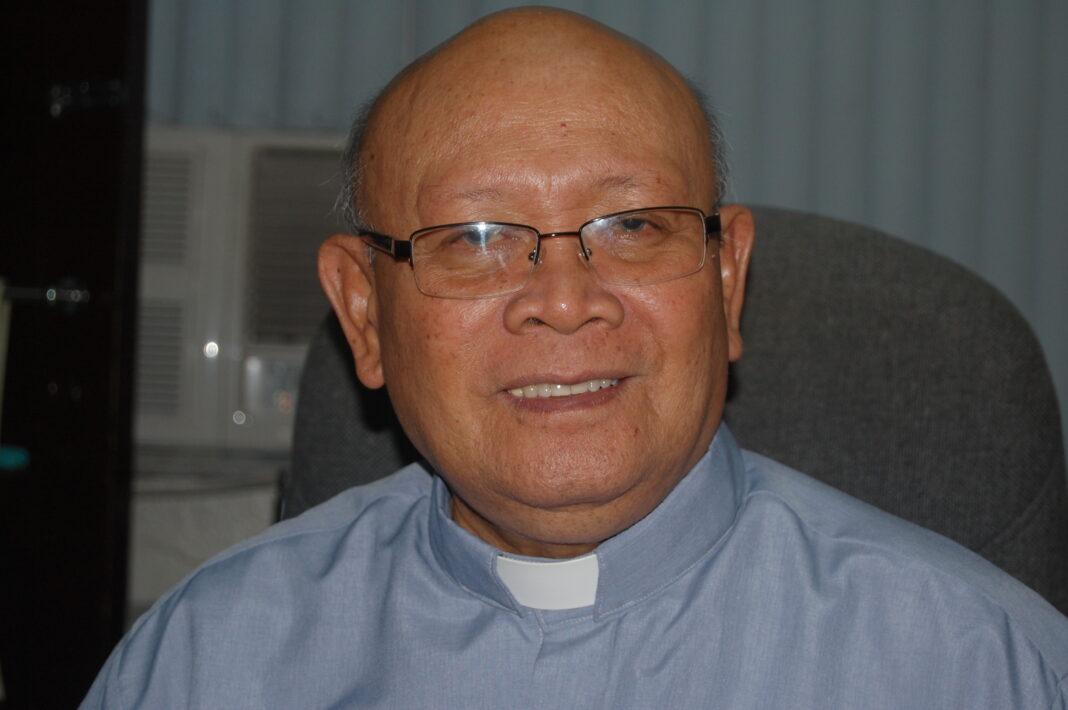 Br. Artemio T. Raymundo Celebrates the Golden Jubilee of His Ordination to the Priesthood

“See your dignity my priest brothers, and be holy for He is holy. As the Lord God has honored you above all others because of this ministry, for your part, love and revere and
honor Him above all others…” –St. Francis of Assisi

The words of the Seraphic Father reflect the great blessing and challenge of those who are chosen for the ministry of the priesthood; to see it as a sublime gift to be grateful for.
Gratitude is in the heart of Br. Artemio “Ting” T. Raymundo, OFMCap. as he celebrated the Golden Jubilee of his priestly ordination last March 14, 2020 at the National Shrine of Our Lady of Lourdes, Quezon City. It was a momentous event recalling on that very same date, fifty years ago, Br. Ting received the grace of sacred
ordination to the priesthood in Pamplona, Spain from the hands of Most Reverend Gregorio Ignacio Larrañaga, OFMCap., Bishop of Pingliang, China.

Br. Ting’s Golden Jubilee celebration was not without difficulties for it happened just as the Philippines is beginning to feel the ramifications of the spread of the Corona Virus Disease (COVID19). The day was also the eve of the imposition of the community quarantine over Metro-Manila. A few days before, the Diocese of Cubao issued a decree suspending all public masses in churches and this placed the celebration in a dilemma. It was such a blessing that the bishop of Cubao, Most Reverend Honesto C. Ongtioco, DD, gave his permission to continue with the celebration with the condition that it should done “in privata” which means that only a limited number of guests are allowed and the church doors are closed to the public.

The celebration commenced at 9:30 in the morning. Br. Ting presided over the Holy Mass and concelebrating with him are some of the Capuchin brother priests from different fraternities. The event was also graced with the presence of Most Reverend Jose Romeo O. Lazo, DD, Archbishop of Jaro and a relative of Br. Ting. The homily was preached by Most Reverend Br. Joseph A. Nacua, OFMCap., DD, Bishop Emeritus of Ilagan and Br. Ting’s batchmate in his seminary years. Br. Eugenio P. Lopez, OFMCap., Provincial Minister, presided over Br. Ting’s renewal of commitment to the priestly service. Just before the final blessing, Br. Ting was treated to a surprise video presentation showcasing important scenes, personages and events in his life and a message from Br. Troadio S. de los Santos, OFMCap., from Abu Dhabi, United Arab Emirates.

Assisting in the mass were the ministers from the National Shrine of Our Lady of Lourdes: lectors who proclaimed the readings and senior members of the Knights of the Altar who served at the Mass. The music was beautifully rendered by the “schola cantorum” composed of the brothers from the fraternities of St. Lawrence of Brindisi, Tagaytay; Padre Pio, Lipa and Our Lady of Lourdes Seminary, Lipa. Serving as masters of ceremonies were Br. Paul Vincent A. Perlado, OFMCap. and Mr. Joseph Villaflor, Worship Head of NSOLL. Though the Mass was celebrated “in privata”, therewere several guests who joined in this special occasion. These include some Franciscan religious sisters, friends of Br. Ting from St. Anthony, Singalong, Manila and friends from NSOLL. In his thanksgiving message, Br. Ting expressed his gratitude to those who worked and have given their time to make the celebration successful even though the situation is difficult. He acknowledged the brothers especially Br. Joseph, his batch mate and homilist, the ministers of the liturgy, and the guests who came to be with him.

After the Mass, all proceeded to the Seraphic Hall of the Lourdes School Elementary department for the reception. Though the feeling of uneasiness is somehow felt because of the impending community quarantine, it did not hamper the fraternal and jovial mood that was exchanged during the meal. Br. Ting was greeted with warm words and gestures of congratulations as he has reached this significant milestone in his Capuchin life. May the good Lord continue to bless Br. Ting in his life and ministry as a Capuchin brother priest.