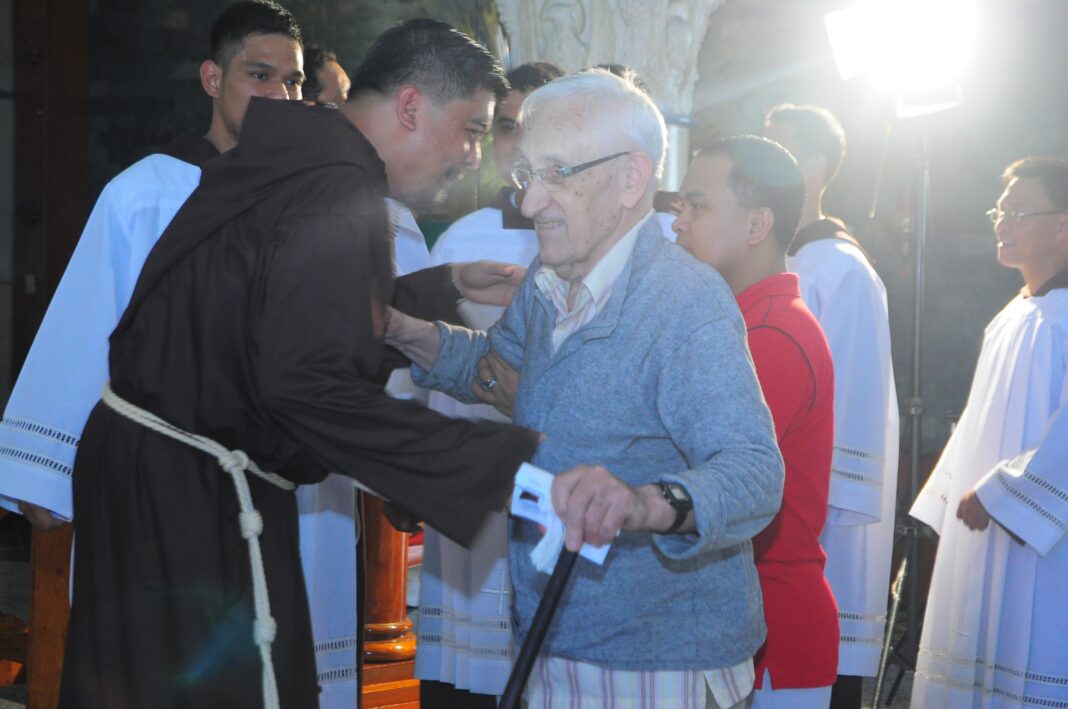 In the midst of all the great tension, uneasiness and agitation caused by the Corona Virus pandemic and the Enhanced Community Quarantine implemented throughout Metro Manila, one Capuchin brother relished in the great peace of the Lord as he quietly embraced sister death and returned to his true abode. Last March 20, 2020, Br. Manuel Javier Remirez de Ganuza Galar, OFMCap. died in his room in the St. Francis of Assisi Fraternity, Mandaluyong City. Since 2016, Br. Manuel was already in a bedridden state as he suffered from multiple myeloma and other complications arising from it.

With all the restrictions caused by the quarantine period, Br. Manuel was given a simple funeral at the St. Francis of Assisi Parish Church. There, the brothers of the fraternity led by their guardian, Br. Jose Eduardo A. Mayo, OFMCap., some lay collaborators and a few friends and parishioners spent time to offer prayers and masses for his soul. Many wished to visit the wake but they were hampered by the quarantine but it did not prevent them to express their condolences and share their memories and gratitude to Br. Manuel through social media platforms. Some of the brothers in the Metro Manila area came to visit and offers masses for him; Bahay Capuchino fraternity on March 21 and the following day, March 22, the brothers of Lourdes Fraternity, Quezon City. For those who cannot come, they were instructed to offer a fraternity mass and pray the Office of the Dead for his soul.

The interment rites were held last March 24, 2020. The first Mass of
commendation was held at St. Francis of Assisi, Mandaluyong and was presided by Br.Eugenio Juanilo P. Lopez, OFMCap., Provincial Minister and assisted by Br. Jose Eduardo, who served as deacon and homilist. In attendance were the brothers from the fraternities of St. Francis of Assisi, Mandaluyong; Sta. Teresita and Bahay Capuchino,
Quezon City and a few guests. In his homily, Br. Jose Eduardo shared memories about his experiences with Br. Manuel and gave a reflection on death and how the Capuchins, who, though in the midst of its dangers, strive to be faithful to their mission as reflected in their response in times of plagues and epidemics. Just before the rite of
commendation, Br. Eugenio gave words of gratitude to Br. Manuel for the great service that he rendered to the Province. After the Mass, the brothers bid Br. Manuel farewell as he brought to Lipa by the funeral vehicle of La Funeraria Paz. Because of the travel restrictions, the brothers were not able to accompany him in the journey to Lipa.

Upon reaching Lipa he was welcomed by the brothers of Our Lady of Lourdes Seminary and Padre Pio fraternities. The second mass of commendation was held in the Transitus chapel and was presided by Br. Ron E. Ojeda, OFMCap., Provincial Vicar and concelebrated by Br. Edgar S. Martinez, OFMCap. , who gave the homily, and Br. Anthony C. Almazan, OFMCap. Present in the burial rites were the other perpetually professed brothers of the Lipa fraternities; first year Post Novices; brother- Postulants and sisters of the Clarisas Capuchinas Sacramentarias of Lipa. Br. Manuel, who is known to many as “superlolo”, will be fondly missed by the brothers as he served to be one of the great cornerstones of the Philippine Province.

He arrived in the Philippines as a missionary in October 1955 after his tenure asprofessor in the Capuchin seminary in Alsasua, Spain. Since coming to the country, he had served the brothers in various capacities; as formator during his term as rector of Our Lady of Lourdes Seminary in Tagaytay in 1957. He was also an important figureduring the transfer of the seminary to Lipa in 1967 where he continued to serve asrector until 1970. He also served as parish priest of the St. Anthony of Padua Parish,Singalong (1970-1980) and Sta. Teresita del Niño Jesus Parish (1980-1982.) From1982 until his death he was assigned at St. Francis of Assisi, Mandaluyong where he
had various responsibilities – guardian, local economo and treasurer of Lourdes School of Mandaluyong. He is also known for his service in administrative positions such as definitor and, for four terms, Provincial Treasurer.

The Province is truly grateful for the gift of life, vocation and mission given to Br. Manuel. His long life has proven to be a fruitful one as manifested in the growth of the Province through the years. Not only the brothers, but many people, lay collaborators; the staff of the Provincial Accounting Office; parishioners and alumni of Lourdes School of Mandaluyong remember his presence and their experiences with him. Even in his infirmity he has remained steadfast and in his death, he serves as an inspiration to all the brothers – to hold on and be faithful to the Capuchin life until the end.

Eternal rest grant unto the soul of Br. Manuel, O Lord, and let perpetual light shine upon him…may he rest in peace…Amen.