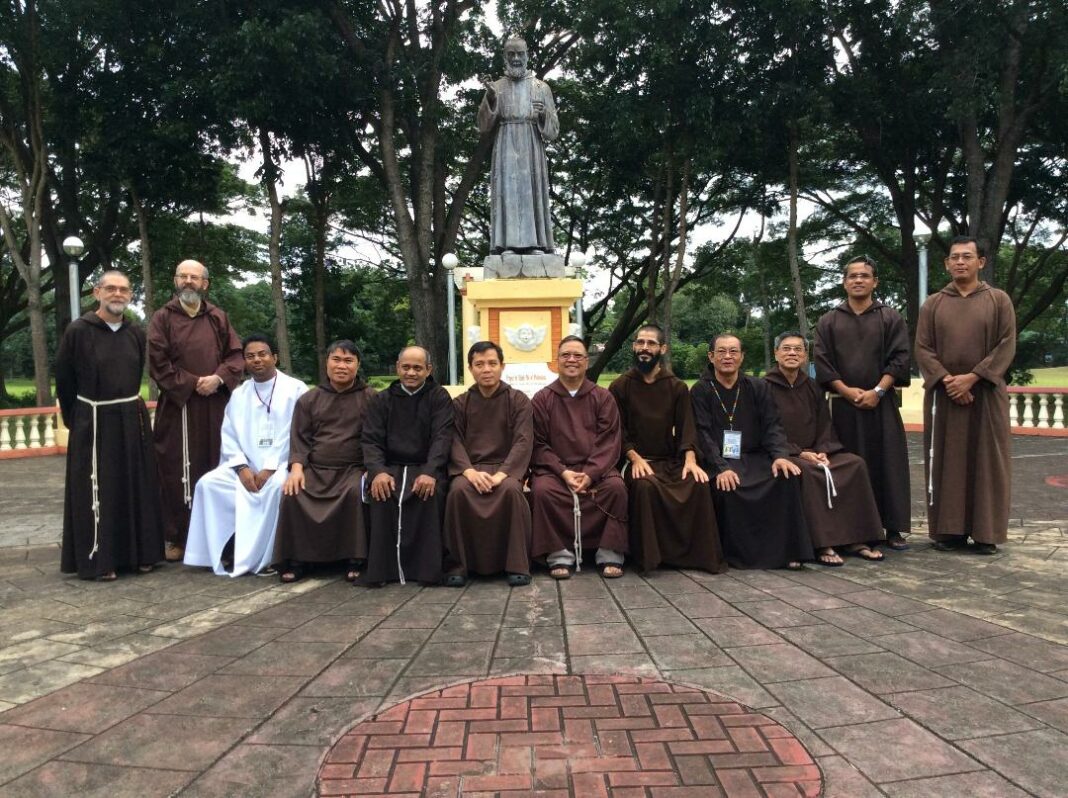 The provincial ministers, custodes, and delegate superiors of the different jurisdictions comprising Pacific-Asia Capuchin Conference gathered last November 11-15, 2019 for their annual meeting at the Capuchin Retreat Center, Lipa, Batangas.  The participants for this meeting include the following:

Br. Jonathan Williams, custos of Papua New Guinea, was absent because of their custody is preparing for their coming elective chapter.

The meeting commenced on the evening of November 11 with the Eucharistic celebration integrated with Vespers which was presided by Br. Victorius Dwiardy, OFMCap.  In his homily, he challenged the brothers to be true and authentic ministers through their life of service to their respective jurisdictions.  Reflecting on the Gospel (Luke 17: 1-6), he called on the ministers not be stumbling block on the brothers but lead them to be faithful in their Capuchin lives.

On the second day of the meeting, the brothers listened to a conference given by Rev. Fr. Rene T. Lagaya, SDB on the topic ChristusVivit: Its significance on the Formation of the      Youth and Candidates for Religious Life which was held in the morning.  Fr. Rene gave an exposition on this apostolic exhortation of Pope Francis on the youth and connected it with relevant concerns in religious formation.  The talk was very informative and the brothers also had an open forum where they shared the experiences of their jurisdictions regarding apostolate to the youth and challenges in forming candidates to the Capuchin life.  After the conference the brothers went to the dining hall for lunch and were treated to a beautiful cultural presentation performed by students of the Casa del Bambino Emmanuel Montessori from Batangas City.  The students performed several Filipino dances and songs which impressed and delighted the brothers.

In the afternoon, the brothers gathered again for the reporting of the ministers.  It was the time for the brothers to share news, information, issues and concerns regarding different aspects of the Capuchin life in their respective jurisdictions.  The flow of the reporting was moderated by Br. Eugenio P. Lopez, OFMCap, PACC President who determined the sequence by having the delegates draw lots.  The first three reporters were the delegates from Timor Leste, Malaysia-Singapore and Nias, Indonesia.  In the evening, the brothers had the concelebrated Holy Mass with Vespers which was presided by Br. Denis Baptist Fernandes, OFMCap. of the Custody of Japan.

On the third day (November 13), the reporting of the ministers continued and it was finished by lunchtime. In the afternoon, the ministers concelebrated in the funeral mass of the late Br. Mateo O. Goldaraz, OFMCap. held at the Transitus Chapel, Capuchin cemetery.  It was a meaningful sign of solidarity as the ministers joined the Philippine Province and the many faithful who came to give their last respects to this outstanding missionary and pillar of the Province.

After the mass, the meeting continued and Br. Victorius Dwiardy, OFMCap. gave his message to the ministers.  In his address, he highlighted concerns about formation in the entire order.  He gave attention to the fact that the growth in the candidates to the Order are found in Africa and Asia Pacific Region while it is dwindling in Europe and North America.  He also discussed its implications in the economic standing of the Order.  Citing the circular letter of the General Minister, Br. Roberto Genuin, OFMCap. Let Us Give Thanks to the Lord!, he challenged the ministers towards solidarity by being open to send brothers to compose international fraternities especially in jurisdictions where the Order is dwindling.

After his address, the ministers proceeded to the election of the new officers of the Conference and this was done by casting ballots.  The new set of officers includes Br. Hermanus Mayong Andreas Acin, OFMCap. of Pontianak as the president; Br. Selestinus Manalu, OFMCap. of Medan as vice-president and Br. Michael Teng Sun Tong, OFMCap. of Malaysia as treasurer; he was also subsequently selected as the new secretary of the conference.  After the elections, Br. Victorius thanked the previous officers, Brs. Eugenio P. Lopez, OFMCap. and Laurence Kettle, OFMCap., for their generous service to the conference.

The day was spent for rest and recreation as the brothers left the retreat center early in the morning and proceeded to the renowned Villa Escudero Resort in Tiaong, Quezon.  Joining them in the trip are the Post Novice Brothers from Malaysia, Korea and Papua New Guinea and a Postulant from New Zealand.  The brothers explored the beautiful hacienda; they had an educational tour in the museum, a carabao cart aride around the area, and a relaxing lunch in the al-fresco restaurant located within the running waters of a spillway of the Labasin Lake.

After lunch, they travelled to Tagaytay City, Cavite where they first visited the Ina ng St. Francis of Assisi Fraternity-Ina ng Laging Saklolo Parish in Barangay Sungay.  They were warmly welcomed by the brothers in the fraternity and treated to coffee and snacks.  From Sungay the brothers visited the Rogate Store in Silang, Cavite to check for religious items that they might want to buy and then to another merienda treat at Mushroom Burger in Brgy. Kaybagal South, Tagaytay.

After snacks the brothers proceeded to the St. Lawrence of Brindisi House of Studies for the final leg of the tour.  At 5:30 pm the brothers, together with the members of the St. Lawrence of Brindisi Fraternity, gathered at the Santuario di Padre Pio for the Eucharistic celebration.  The concelebrated Mass and Vespers was presided by new PACC President , Br. Hermanus Mayong Andreas Acin, OFMCap.; joining him in the altar as antiphoners were his fellow new officers – Brs. Selestinus Manalu, OFMCap. and Br. Michael Teng Sun Tong, OFMCap.  In his message, Br. Hermanus thanked the Philippine Province for its warm welcome, hospitality and for organizing this annual meeting; he also expressed his gratitude to Brs. Eugenio P. Lopez, OFMCap. and Laurence Kettle, OFMCap. for their service as previous officers of the conference.  The evening ended with a sumptuous dinner prepared by the fraternity.

By the last day, some of the brothers had already left the center and returned to their respective places.  Br. Victorius Dwiardy, OFMCap. left early morning of Thursday for his flight back to Rome via Jakarta, Indonesia; Brs. Selestinus Manalu, OFMCap. and Yoseph Sinaga, OFMCap. traveled early this day for their flight back to Indonesia.  The remaining brothers gathered at the Monasterio del Santisimo Sacramento chapel for the concelebrated morning mass.  The Mass was presided by Br. Michael Teng Sun Tong, OFMCap. and with him at the altar were Brs. Eugenio P. Lopez, OFMCap. and Paul Vincent A. Perlado, OFMCap. while the other ministers concelebrated in the pews.  After breakfast, the ministers bid each other farewell as others went to Manila to wait for their flights going back home while will still remain in Lipa and Manila to attend to other personal concerns.

The brothers of the Pacific Asia Capuchin Conference are very grateful to the Lord for his blessings and guidance during the five day meet.  It is with great hope that the new officers will serve the conference with diligence as it faces many challenges in incarnating the Capuchin way of life.  All look forward to next year’s meeting which will be held in Sibolga, Indonesia.

Farewell, Lolo Francis: The Death of Br. Francisco S. Garces, OFMCap and a Recollection of His Life