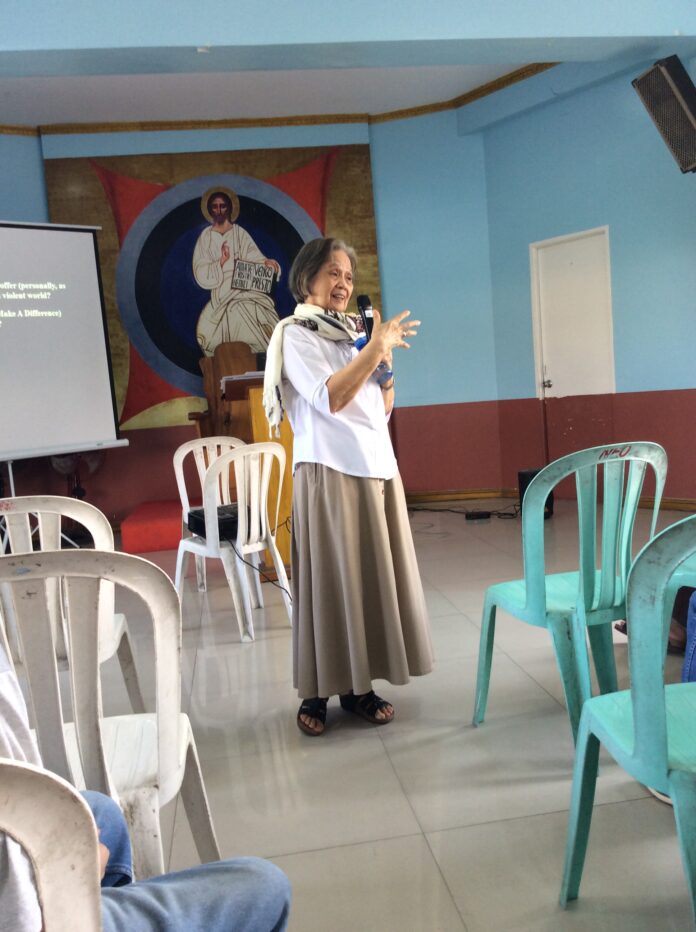 The Capuchin brothers of the Philippine Province gathered last January 27, 2020 for the
monthly recollection held at the St. Francis of Assisi Parish, Pulo, Cabuyao, Laguna. The topic
of the recollection was about the Philippine Church’s celebration of the Year of Ecumenism,
Inter-Religious Dialogue and Indigenous Peoples. The theme for this year’s celebration is
Dialogue Towards Harmony and it is the last of the nine year preparation for the 500 th Year
celebration of the Evangelization of the Philippines which is set for next year, 2021. The host
fraternities for the monthly recollection are San Jose Manggawa, GMA, Cavite and St. Francis
of Assisi, Pulo, Laguna and they worked together to make this month’s ongoing formation
gathering an eventful one.

For this day, the brothers were guided by Sr. Lilian Curaming, FMM; a Franciscan
Missionary of Mary sister who is known for her active engagement in Inter-faith dialogue,
particularly with the Islamic religion. She is also a faculty member in theological schools such
as the Mary Hill School of Theology, Quezon City and the Divine Word Seminary Tagaytay,
Tagaytay City. As she relayed at the beginning of her talk; she was initially involved in the
guidance counseling ministry but an encounter with a Muslim student inspired her to learn about
the Islamic faith and culture. This has led her to a journey of being immersed in understanding
not only Islam, but also the way of dialogue with peoples of other religious beliefs.

In her conference, she reflected on the leper of experience of St. Francis of Assisi as the
way of his encounter not only with the Lord but with a genuine human being. This challenges
Franciscans to see this event not only as in the religious or spiritual sense but in terms of
relating, understanding and respecting others despite of their conditions or beliefs. Francis’
view of penance is to be viewed in the way that he distanced himself from actions, behaviors,
and attitudes that would divide and destroy the bonds of human community and violate the
sacred character of human life. Another significant manifestation of this is his encounter with
the Sultan Malik al Kamil in Egypt where he fostered the spirit of respect and dialogue.

At the end of her talk, Sr. Lilian asked the brothers to reflect about the call of dialogue,
not only with peoples of other religions or cultures, but within their respective fraternities.
Fraternity life is also an important arena where unity is to be nourished and this is to be
accomplished when the brothers foster harmonious relationships and not walls of division. She
also left questions for the brothers to ponder upon such as the implications of being brothers in
today’s fragmented world through concrete plans and expressions. After her sharing, some
brothers asked questions which focused in understanding not only inter-religious dialogue but
Filipino Muslims as well. She was given words of gratitude and simple token by the Provincial
Minister, Br. Eugenio P. Lopez, OFMCap.

After the conference, the brothers proceeded to the parish church for the Eucharistic
Adoration and Benediction led by Br. Deo F. Quinto, OFMCap., guardian of the fraternity. This
time of prayer and reflection also became the opportunity for some to receive the Sacrament of
Reconciliation from the brother-priests. After the benediction, the brothers had lunch and spent
time sharing and engaging in fraternal dialogue with each other. As the brothers return to their

fraternities, may this day be an inspiration, not only to understand the content of this year but
live its fundamental message – the spirit and concretization of dialogue – in their Capuchin lives.

We Give our Yes!